With which celebrity would you have an affair with?

Singers, actors, TV presenters... They make us dream and fantasise! But who are the celebrities you would like to have an affair with? Gleeden.com has conducted a survey on you ladies, to discover who makes you fantasise the most! Discover the results of this exclusive study*! 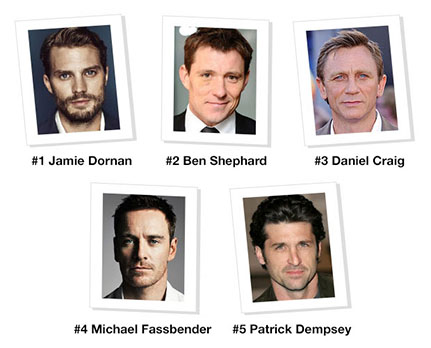 Playing Christian Grey on screens in the sulphurous movie Fifty Shades of Grey, Jamie Dornan, has been elected sexiest man ever by... you ladies! We bet that the steamy sex scenes of the movie will continue giving you sexy ideas!

The English television presenter and journalist turns Brits on! Is it his confident look that catches your eyes? Who knows, but Ben Shephard ranks second in your naughtiest fantasies.

The sexiest James Bond turns you on! Daniel Craig ranks 3th in cheating Brits' heart thanks to his chiseled face and hot body! His role in the next 007 movie "Spectre" will for sure arouse their desire even more!

The actor and producer Michael Fassbender ranks 4th in the study conducted by Gleeden.com! Will he continue making you fantasize with his upcoming role as Steve Jobs in the biopic movie produced by Danny Boyle? We bet that his blue eyes and sexy look will!

The famous "McDreamy" from Grey's Anatomy - who has recently divorced - is in the top 5 of the sexiest celebrities according your tastes! Who said the fantasy of having an affair with a doctor was just a cliché?

Do you take off your wedding ring when you are with your lover?

ffair ask themselves before meeting with their lover! Gleeden.com has conducted a survey on you guys, to find out if your wedding ring is shelved during your naughty unfaithful rendez-vous. Discover the results of this exclusive study*!

What if Easter was the perfect opportunity to spice up your routine? This is what suggests the brand new illustration from our designer Jessica! Always glamourous and super feminine, discover Jessica's special Easter column!