What would you forgive to a politician?

Politicians' affairs is a topic that have passionate the media for years... It is back on the current news now that the French President has been caught (again)!

In January 2013, their affair has been revealed by a famous french magazine. The debate has been recently relaunched now that new pictures of President François Hollande and actress Julie Gayet have been published in newspapers all over the world!

The study conducted by IPSOS Observer and Gleeden.com reveals what you think about this topic... The results might be surprising! 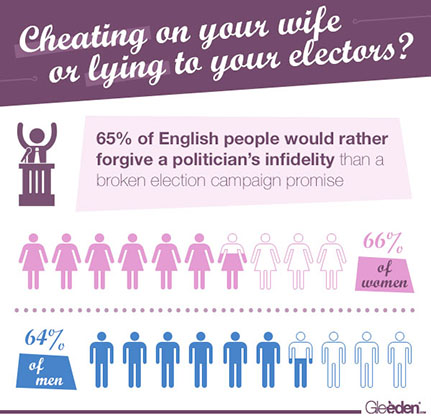 Do you feel sexier since you are having an affair? What has your lover changed in your daily life? Would having a lover be THE solution to feel more desirable and blooming?

Have you been spoiled by your lover for Xmas?

Who said Christmas presents were only for husbands and wives? Gleeden.com has conducted a survey* on its members to discover what unfaithful female and men were planning to offer to their lover!