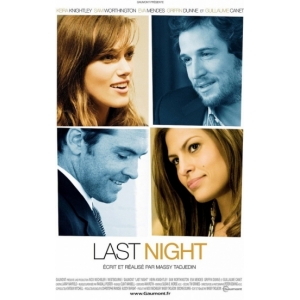 Infidelity according to Keira Knightley

Keira Knightley, star of Pirates of the Caribbean, tells us about her vision of infidelity…

Keira Knightley is currently promoting her film Last Night, which treats of taboo subjects such as infidelity within the couple.

Last Night is a modern and topical story depicting the couple in its complexity and fragility when faced with the temptation of infidelity. Down with the taboos! Filmmaker Massy Tadjedin decides to root out the evil by discussing it freely, as beyond behavioral codes and discourses what he represents in infidelity and extramarital encounters poses probing questions about the self and the couple.

Keira Knightley plays the role of Joanna, a young married woman who starts to question her marriage after a night of temptation. But in the movie, Joanna does not physically cheat on her husband. She spends the night in the arms of another man. It’s more than a purely sentimental story. On the other hand, her husband Sam lets himself go sexually with another woman…

This role prompted a reflection on adultery for Keia Knightley.

"What is worse? Joanna spends the night in the arms of a man who loves her, and who she loves. He’s sleeping with somebody else…We had constant arguments about who was guilty and what was the worst action. Somewhere in the middle I thought, 'Well, at least she doesn't sleep with him. What's the problem? They have a nice night, they have a bit of a kiss, she doesn't really do anything'. And then I went back to thinking hers was worse. I think it depends on where you are in your life, and that will always change. It's a moveable feast."

Can infidelity be the test of a marriage? “Somebody said a great line - 'He tests the marriage, and she breaks it'. I don't know if I agree with that or not, but I can certainly understand it at the same time."

"I vacillate between the two sides. I've got no idea. I rather enjoy not having an idea. I went in absolutely thinking that hers was worse.”

Arnold Schwarzenegger had a child with his mistress!

A story that goes far beyond a mere affair…

Sandra Bullock: ''My ex-husband cheated on me''

Jesse James, former husband of the sublime actress Sandra Bullock, opens up about his infidelity: “Yes, I cheated on my wife. Just like millions of other men.” Today, he gets candid on the reasons behind his extramarital affairs.