”Fidelity or faithfulness?” by Maïa Mazaurette

In this exclusive new column, Maïa Mazaurette explores the contradictions that run relationships and defend the idea of making a difference between fidelity and faithfulness. Can we cheat and be faithful? And can we be 100% faithful and lack devotion? Discover her opinion on this tricky topic! 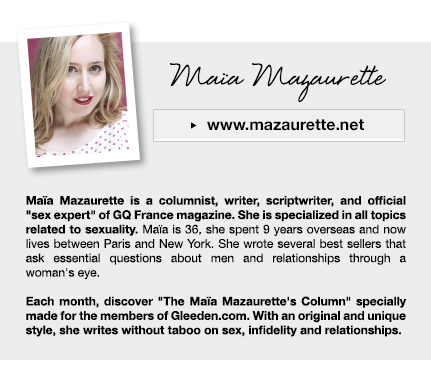 Our relationships often look like Swiss knife. A borderline mix between cultural, economic, marital, affective and sexual partnerships. That’s a lot for sure. Especially because we are often ask to reach impossible goals. We are supposed to stay on the right track and succeed all the time. That would require to have 8 arms and last time I checked, I just had 2. For all that, are unfaithful people the dunces of the class? I don’t think so.


When we speak about infidelity, we often miss something essential: the sexual infidelity. There are plenty of different infidelities: financial, emotional, narcissistic, and focused on one specific thing (yes, I’m talking about your Playstation) Everybody is content to stay in a blurred vision of it, to maintain the confusion. Even worst, to evoke possible sex influence in the other types of infidelity I mentioned.


When one talks about infidelity without precising what type of infidelity it is, it’s like implying that flirting around lead to betrayals at all levels of the relationship. That still needs to be proven. That would be easier to write the entire story in black and white, but we live in a society where shades of gray are a must. And we know that most of the people cheating on their partner are happy in their relationship. Emotionally speaking, everything is fine. On a daily basis, everything is fine. A little « too fine » maybe.


In these conditions, mixing sexual fidelity and faithfulness up are just intellectual dishonesty. According to Wikipedia, faithfulness is the devotion to a cause or a person. One can be unfaithful and shows his unfailing devotion when it comes to listening, caring, sharing domestic tasks, to manage a budget. On the opposite, some people are jealous and possessive and don’t show any devotion on a daily basis: they are ready to favor their career at the cost of their relationship and to party all night long when their partner need them.


Personally speaking, I don’t think we can be perfect all the time (that’s because I only have 2 arms). Of course, unfaithful people are not better than others. However, men and women looking for an affair manage to get a secret garden without impacting their official partner. In this respect, the only victim of a successful infidelity is the idea of fidelity (fortunately, mistreated ideas don’t complain often)


Having sex with someone else doesn’t necessarily imply to give our devotion to someone else, because sex is not everything. I know that this activity will always have an impact, but let’s not exaggerate, that’s not the end of the world.


Ironically, the defenders of a strict sex life are the ones who think we talk too much about sex, when they are responsible for give sex the highest importance in relationship. I would like to tell them: “calm down, everything in life is not only about sex!” There is the intimacy to sleep together, to tell bedtime stories to kid as well as pouring a glass of wine to each other.


I didn’t get the impression to be immoral when I said that it is worst to have secret debts, to leave everything behind when the household is facing difficulties, to constantly favor your career no matter what (ot to always favor the last episode of Game of Thrones)… These have more consequences than an affair.


Cheating and being faithful is possible. That reaffirms that couples are beyond sexuality, no matter what fidelity supporters say. In the end, who are sex-obsessed? The ones who are the most organized? Well, I don’t think so.

Who would have an affair with: you boss, your intern or your co-worker?

Gleeden.com has conducted a survey on you guys to know who makes you fantasise the most at work. Discover the results of this exclusive study*!

1 married woman out of 2 considers her marital sex life as less than satisfactory!

Are you satisfied sexually speaking? Do you reach the climax all the time or... never? Gleeden.com has conducted a survey on you ladies to find out. Discover your answers!