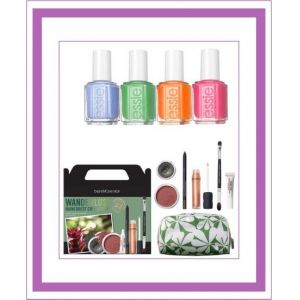 Want to win cool summer goodies? It's so easy, just answer the following question on Twitter or Facebook and be automatically entered for a chance to win!

How To Enter:
~ Twitter - You MUST include @Gleeden_En (i.e. mention us) and then answer the question:
“Do you think more people would cheat if they knew they'd never get caught?”
or
~ Facebook - Answer the same question on our GleedenUS fan page.

Each reply counts as one registration. A person can register without limits and on either or both social media platforms. The Contest begins at 10:00 a.m. Pacific Standard Time (“PST”) on July 11, 2012 and ends at 12:00 a.m. PST on July 18, 2012 (the “Contest Period”). In the event of a dispute over the identity of an entrant, the entrant will be the registered owner of the Twitter and/or Facebook account.

Selection Of Winners: At the end of the Contest Period one entrant on Twitter or one entrant on Facebook with the most creative answer will be selected by the Sponsor from the eligible pool of entries. The odds of winning depend upon the number of entries received.
The winners will be notified by tweet and direct message (on Twitter) and by private message (on Facebook) on or about ten (10) days after the applicable weekly entry period ends. The decisions of the Sponsor are final and binding on all matters relating to the Contest. At the event of no reply from the winner, the second best entry will be deemed the claimant of the prize.

Total of all prizes: $121. All federal, state, and local taxes, and all other expenses not expressly listed above are the sole responsibility of the winners.

Eligibility: No purchase is necessary to enter or claim prize. The Twitter and Facebook Contest (the “Contest”) is open to anyone who is at least eighteen (18) years of age and an U.S. resident. Blackdivine LLC (“Sponsor”) and its respective companies, subsidiaries, affiliates, suppliers, advertising agencies, and the families and persons living in the same household as such employees, are not eligible to participate. The Contest is subject to all federal, state, and local laws. Void where prohibited or restricted by law or regulations.


Release of Liability: By participating, you release Sponsor and their subsidiaries, affiliates, partners, employees, directors, agents, advertising agencies, and all other associated with the development and execution of this Contest, from any and against any and all injury, loss or damage caused or claimed to be caused by your participation in the Contest and/or the acceptance, awarding, receipt, use and/or misuse of the prize, and you agree that these entities are in no matter responsible for any warranty, representation, or guarantee, expressed or implied, in fact or in law, relating to the Contest and/or the awarding of any prize. Notwithstanding the foregoing, in the event that the preceding release is determined by a court of competent jurisdiction to be invalid or void for any reason, entrant agrees that, by entering the Contest, (i) any and all disputes, claims, and causes of action arising out of or in connection with the Contest, or any prizes awarded, shall be resolved individually without resort to any form of class action; (ii) any claims, judgments and awards shall be limited to actual out-of-pocket costs incurred, including costs associated with entering the Contest, but in no event attorney’s fees; and (iii) under no circumstances will any entrant be permitted to obtain any award for, and entrant hereby waives all rights to claim, punitive, incidental or consequential damages and any and all rights to have damages multiplied or otherwise increased and any other damages, other than damages for actual out-of-pocket expenses. Additional Rules: Entrant agrees to hold harmless Sponsor, its officers, directors, employees, divisions, affiliates, subsidiaries, advertising and promotional agencies, from any claim by any third party relating to any rights in any blog registered with Sponsor. By participating in the Contest, entrant agrees to be bound by these Official Rules, including all eligibility requirements and all decisions of Sponsor, which are final and binding in all matters relating to the Contest. Sponsor is not responsible for: (i) lost, late, misdirected, damaged, garbled or illegible entries/registrations; (ii) error, omission, interruption, deletion, defect, delay in operations or transmission, theft or destruction or unauthorized access to or alterations of entry/registration materials, or for technical, network, telephone equipment, electronic, computer, hardware or software malfunctions of any kind, or inaccurate transmission of or failure to receive entry information by Sponsor on account of technical problems or traffic congestion on the Internet or at any web site or any combination thereof; or (iii) any injury or damage to entrant’s or any other person’s computer related to or resulting from participating in the Contest. Sponsor reserves the right to: (i) permanently disqualify from any contest it sponsors any person it believes has intentionally violated these official rules; and (ii) suspend, modify or terminate the Contest if Sponsor believes, in its sole discretion, that malfunction, error, disruption or damage is impairing or will impair the administration, security, fairness, integrity of the Contest. If Contest is terminated before the end date, Sponsor will determine the winner from all eligible entries received as of the termination date. Sponsor reserves the right to disqualify any unauthorized entries, including, without limitation, multiple entries from the same person. Entering the Contest constitutes permission to use the name, voice, photo, and likeness of the winner for advertising and publicity purposes, without further compensation.

LEGAL WARNING: ANY ATTEMPT BY AN INDIVIDUAL, WHETHER OR NOT AN ENTRANT, TO DELIBERATELY DAMAGE, DESTROY, TAMPER OR VANDALIZE THE WEB SITE OR INTERFERE WITH THE OPERATION OF THE CONTEST, IS A VIOLATION OF CRIMINAL AND CIVIL LAWS AND SPONSOR RESERVES THE RIGHT TO SEEK DAMAGES AND DILIGENTLY PURSUE ALL REMEDIES AGAINST ANY SUCH INDIVIDUAL TO THE FULLEST EXTENT PERMITTED BY LAW.

A lover to help with the back to work stress

If the combination of blue skies and burning temperature has been desired for many French this summer, September is here, signaling the end of a summer break in spite of all that is synonymous with pleasure and delight.

You may have heard the phrase, 'they're just wired differently' uttered about someone partaking in unusual or questionable behavior. What exactly does it mean in adults diagnosed with ADHD?