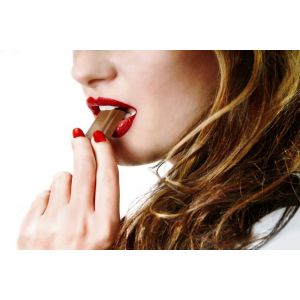 During summer and for a couple of months now, women’s magazines have been overwhelming you with tips on how to lose weight. Drastic efforts, culinary frustrations and other magic formulas, from one magazine to another the headlines are the same. The Gleeden.com team has decided to go against this trend and tell you the famous secret to being slim, known for it’s many virtues.

Filled with lipids, glucides, fibers, magnesium, iron, potassium, calcium, sodium… Chocolate is full of vivifying and stimulating properties. Feeling a little down or going through a stressful period? With its high level of serotonin, chocolate will calm you down. Some psychoanalysts explain that taking a bite of chocolate can be compared to looking for the maternal breast. It can be either seen as a regression back to childhood, either as a pleasure exclusively reserved to children, you decide; but lets not forget that we don’t often eat chocolate in public.

On Gleeden.com, if we like eating chocolate, it is mainly because of its aphrodisiac virtues caused by phenethylamine. This substance has the same stimulating effects on some parts of the brain as amphetamines. An efficient cocktail of psycho-actives and stimulants that naturally increases the endorphin production better known as pleasure hormones.

If 41% of women get more pleasure by eating chocolate than by making love, it is apparently because melted chocolate on their tongue gives them a sensation even more intense than a passionate kiss. Indeed, ten researchers from the Mind Lad** have compared the heart beat frequency of 12 volunteers at rest, after eating 60% cacao dark chocolate and after kissing their partner. According to Dr. David Lewis, the pleasure brought by the consumption of chocolate could have the same effects as an orgasm, by doubling the heart rate from 60 to 140 heartbeats.

Furthermore, after studying the effect it has on the brain, the result was crystal clear. When chocolate starts melting on the tongue, all the brain regions could receive a message even more intense than the one received after a kiss. David Lewis even demonstrated that the effect of chocolate lasts 4 times longer than the effect of a deep kiss.

Considered as an ideal ingredient for love stories chocolate has been king for centuries. In 1702, Louis Lemery, French, doctor, botanist and scientist, publicly announced his discovery. In his food treaty, he explains: “Chocolate’s stimulating properties could turn Venus on.”

So if you feel like turning your partner on in just a few moments, take the example of Mme du Barry, who apparently always remembered to offer a cup of hot chocolate to her lovers. Another well-known example: if your libido is down, follow Madame de Pompadour’s habit. Louis XV of France often blamed her for being to “cold”; so in order to turn the heat up, she drank, on a daily bases, deciliters of hot chocolate perfumed with ambergris.

Chocolate is a stimulating ingredient which brings sensual pleasure and mildness. Those words are very close to love, and chocolate will give you an explosion of emotions and flavors to share as much as you like… with your lover!

*Le Figaro, a French daily newspaper.
**The University of Sussex

This summer, 63% of lovers will send a postal card in an envelope to each other.

Even though the sun may not be shinning for all our vacationers this July, holiday time, symbol of departure and mobility, is nevertheless here. As we are nearing the comings and goings of July and August vacationers, an unexpected means of communication has become the in-thing among lovers to overcome distance.

A lover to help with the back to work stress

If the combination of blue skies and burning temperature has been desired for many French this summer, September is here, signaling the end of a summer break in spite of all that is synonymous with pleasure and delight.