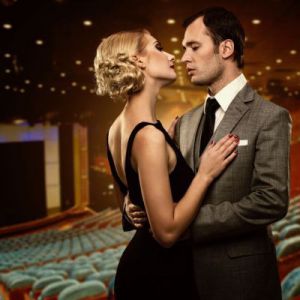 When infidelity drives the plot

Adultery is a choice topic for cinematic narratives, partly because of the many possibilities, points of view and messages it has to offer.

To treat of the theme of infidelity in cinema can allow for a sociological outlook on the different historical periods and societies put forward on the silver screen. However, filmmaking talent isn’t drawn off the cuff! This seemingly easy theme can be extremely complex, and runs the risk of falling into phoney tear-stained drama. Here is Gleeden’s selection of artfully unfaithful films. To your DVDs!

with John Malkovich, Glenn Close and Michelle Pfeiffer (1988) Dangerous Liaisons is a British-American film by Stephen Frears, adapted from the famous epistolary novel by Choderlos de Laclos. To Frears’ mind, Dangerous Liaisons is a novel depicting love with astonishing modernity. The Marquise de Merteuil and the Vicomte de Valmont, brilliant and witty aristocrats as well as former lovers, challenge each other’s prowess: Valmont must seduce two ladies of the aristocratic world and bring proof of his success to Merteuil.

The Bridges of Madison County

(1995) The Bridges of Madison County is an American film with Clint Eastwood as both director and lead actor. It is adapted from the Robert James Waller novel telling the story of Francesca, a reserved and self-effacing woman whose existence only amounts to household chores on the farm. When her husband and children leave for four days, she meets Robert Kincaid, a photographer passing by. Little by little their relationship turns into a passionate love affair. For four days, Francesca feels like a new woman, fulfilled by this man who can give her understanding and new dreams. Several years later, after Francesca dies, her children Michael and Caroline go back to their childhood home to settle their inheritance. They then discover the hidden side of their mother’s life.

(1999) William is a doctor. He leads a balanced family life with his wife Alice and their daughter. But this familiar routine crumbles the day Alice confesses her once-entertained desire to cheat on him and leave with another man.

by Adrian Lyne, with Richard Gere and Diane Lane (2002) Edward and Connie lead a quiet life in New York suburbia. They are both fulfilled: their professional and personal lives have satisfied all of their expectations. Edward is the very image of the ideal husband, both attentive and affectionate. But Connie’s feelings evolve along the humdrum and monotony of the years passing by. One day she meets Paul who invites her up to his place. Connie hesitates, but something drives her to follow her instincts and she accepts the invitation of this mysterious and gallant man. This incident rapidly evolves into a passionate affair, and this man becomes the only thing Connie can think about.

by Woody Allen (2005) Chris is a tennis instructor at a high-end private club. His encounter with Tom opens the doors to London high society. He marries Chloe, Tom’s sister, but his feelings for Nola, a young actress, wreak havoc on his plans.

by Marc Esposito with Bernard Campan, Gérard Darmon, Jean-Pierre Darroussin, Marc Lavoine (2003) Alex, Antoine, Jeff and Manu have been friends for over twenty years. Antoine leaves his wife when she confesses to an affair. Alex, a shameless philanderer, is cheating on his own wife. Manu falls in love with Juliette, a depressed client of his. Jeff, divorced, gives away his daughter and decides to quit work altogether to live his relationship with Elsa, a beautiful and much younger woman, to the fullest: four different men, within four different and yet so near journeys.

Although these stories do not always end so happily, one can often understand the freedom felt by these characters at the outset of their indiscretions. Who has never dreamed of an interlude with Olivier Martinez (Unfaithful) or Scarlett Johansson (Match Point)? These films often allow us to project ourselves into a life which could have been ours had we dared to take the plunge. Thankfully, these stories do not end this badly in real life, where we can either find a lover for one night, or several months, or even love, and start life over again…

Meet the winners of the Gleeden casting!

The French and Spanish winners of the contest are to become to new Gleeden muses, congratulations to them!