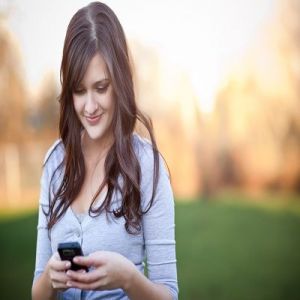 It was said that the minitel encouraged the beginning of the first virtual love affairs. According to a Gleeden.com survey, 92% of people who are unfaithful tend to use « nomadic » terminals in 2012.

Are lovers now more tempted to use new technology equipment? On June 30th, while Orange put an end to what was left of the famous French Videotex online service, still used by 2 million people in 2010, the Survey showed that one out two members using the extramarital dating platform connects to it via smartphone at the second trimester of 2012. This equipment rating is higher than the 31%* average of “intelligent phone” users in France.

This assessment is not surprising, given the extremely modern ergonomics these new toys have: 85% of users declare having a hard time letting go of their iPhone and other digital tablets not only at work, but also when they get back home to their family.

Even though these gentlemen are convinced their addiction is stronger than their ladies’, they may have to think again: both sides share the same results in terms of equipment and in terms of use. Indeed the mistresses are just as many owning these technology “jewels” as their lovers.

Furthermore, according to the survey, 98% of you expect availability and discretion from mobile terminals. Indeed, for 9 out of 10 people, these tools are strictly personal and 7 out of 10 polled are still quite distrustful and fear sneaky lurks from their other halves. With the summer holidays coming up, mobility seems to be quite appreciated, as it is brings freedom, discovery and adventure.

So be patient, the Gleeden.com mobile application will be launched during summer and will satisfy your encounter desires from the most unusual places!

The dos and don’ts of an unfaithful woman

The general public may have always closed its eyes on male infidelity; however it takes two to cross the line…

This summer, 63% of lovers will send a postal card in an envelope to each other.

Even though the sun may not be shinning for all our vacationers this July, holiday time, symbol of departure and mobility, is nevertheless here. As we are nearing the comings and goings of July and August vacationers, an unexpected means of communication has become the in-thing among lovers to overcome distance.