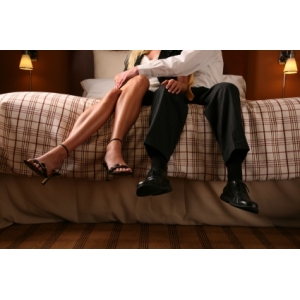 Is a gene responsible for infidelity and one night stands?

Infidelity is a subject that is being study in many scientific fields in the United States. According to a recent study, the chemistry of the brain could make someone be unfaithful. According to some American researchers, certain genes stimulate infidelity. Certain people would therefore be « genetically susceptible » to be unfaithful.

In December 2010, researchers from the State University of New York discovered that a gene could be responsible for the human tendency to be unfaithful or have fleeting affairs. According to Justin Garcia, who supervised the study, «it all depends on the system of pleasure and reward, which explains the release of dopamine. In the case of sex without obligation, the risks are high, the rewards are big and the motivation is variable — all the elements which cause a release of dopamine».An internal release of dopamine could therefore explain why certain people seem to be incapable of staying faithful!

In this new study, researchers have transcribed the history of sexual relationships of 181 young adults (118 women and 63 men), with AND samples to detect the presence of the gene DRD4 and to see if the variant which causes infidelity is present. People who have the gene which possesses this variant are twice as susceptible to confirm to have had «one night stands» than those who don’t. Half of those which have infidelity imprinted in their ADN admit to have been unfaithful in the past, even though only 22% do not have the variant of the gene. However, according to Justin Garcia, «The study does not let all the sinners get off the hook, he states. All those who have this genotype will not necessarily have one night stands or be unfaithful. In fact, a lot of people who don’t have this genotype do have one night stands and are unfaithful. The study simply suggests that a larger proportion of people with this genotype are susceptible to behave in this way». According to the results of the study, one in four humans are a carrier of this gene and therefore susceptible to infidelity by nature. A good excuse for those who don’t know how to justify their lapses?

In a study carried out on 52 women from 17 to 30 years old, psychologists from the University of Texas have shown that the women who showed a strong concentration of estradiol were more sexually «motivated» than others: they would have more of a tendency to flirt and to change partners more often. Women with a high level of estradiol, a hormone from the œstrogen family secreted by the ovaries, would therefore be more fickle than others… The estradiol is a female hormone which sets off the estrus, which is its receptive state of sex and the natural rise in levels during long periods of sunshine would unavoidably lead to a libido increase in a woman. A woman with a high level of estradiol could have more needs if her oestrogen receptors function well, which is not always the case.
Psychologists describe these women as «serial opportunist monogamists»! The level of estradiol, can often rise during periods of sunshine. From which comes the “receptivity” of women in the summer! ».

Carried out by scientists from the institute Karolinska in Stockholm on 550 pairs and their partners, there study was to show that male carriers of one or two samples of the variant of the allele gene 334, which regulates the activity of the hormone vasopressine, often behave differently at home. The number of men, whose genome contained two samples of allele 334, and who have been confronted with marriage problems was twice as large last year. The presence of the variant of this gene generates relationships with their partners which are rockier. These men would be tempted more often to look elsewhere… They would be less susceptible to become attached than others, and could be less caring or loving towards their partners.

Of course, these theories get their meanings and values from exogenous factors such as social professional contexts, family situations, etc. What is for sure is that infidelity is graved in the foundations of our society.

Massy Tadjedin goes behind the camera to direct Last Night, A story of love and infidelity and a romantic drama… so Gleeden.

Gemma Gaetani, Italian writer, author of the book « praise infidelity » tells us her view on infidelity.